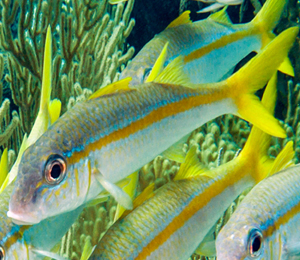 Darting through the reefs and seagrass of Key West's enticing turquoise waters are shimmering, golden-accented gems called the yellow goatfish. Offering enchanting experiences for those snorkeling in Key West, the yellow goatfish are distinctive for their pale color and appealing golden stripe reaching from their eyes to their caudal fins.

With golden tails and white or yellow fins, the goatfish roam Key West's reefs and sandy lagoon areas searching for food. Watch closely to see them root through the sand with their barbels, long "whiskers" hanging from their chins, to detect and nab dinner. Reaching as long as 15 inches, the goatfish can stir up quite a bit of sand while hunting for smaller fish and benthic invertebrates, so be prepared for a cloud of dust while they are feeding. This foraging activity reveals other fish and prey for bigger predators, including the Yellowtail Snapper.

Interestingly, Yellowtail Snappers look enough like yellow goatfish to be their older, bigger brothers. Their pale, iridescent bodies are enhanced with a vivid golden stripe stretching from eye to tail, and their deeply forked tails are beautifully golden. Growing as big as 30 inches long, the yellowtail snapper are twice the size of the yellow goatfish and can weigh as much as five pounds. Their dorsal fins are often more intensely colored and more prominent than the smaller goatfish.

Cruising the sandy areas over Florida's reefs, snappers roam the ocean at about 30 feet but can travel as deeply as 230 feet. Snappers are most frequently nocturnal predators so it's not likely snorkelers will have a chance to see them forage for their usual dinner of smaller fish, crabs, worms and shrimp.

With their brilliantly yellow accents, both the yellow goatfish and yellowtail snapper create captivating and delightful additions to Key West snorkeling tours.