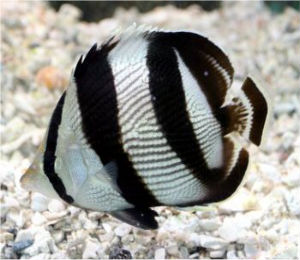 The clear aqua waters around Key West are a great place to enjoy wildlife, especially the beautiful tropical fish.

One of the most interesting fish you can see when Key West snorkeling is the banded butterflyfish. You can easily pick out the butterflyfish because it's a wide, thin-bodied silver fish about six inches long, with broad black bands and a spiny back. It has delicate black-banded fins around its body, and a nose that ends in a point, so that from the side it looks very much like a butterfly's wing.

Although it's small, you have a good chance of seeing the banded butterflyfish, since it's active during the day. It especially likes to hang around shallow waters and coral reefs. They're often seen in pairs, but you may see large schools of them, especially when plankton are present, as that's one of their favorite meals. The butterflyfish is calm by nature, and doesn't tend to run from observers.

What does the banded butterflyfish do when it's not entertaining snorkelers? It likes to feed on sea anemones, corals, tube worms, small crustaceans, and sometimes small invertebrates that it finds on other fish. It has teeth like bristles that allow it to scrape its food off of the coral reef. Its scientific name, "Chaetodontidae," actually means "bristle tooth."

The banded butterflyfish is prey to several larger fish, and at night it hides out because it's a favorite snack of nocturnal sharks and moray eels. If it feels threatened, its first choice is to run. But if it's cornered, it doesn't like to back down. It lowers its head, points its spines, and tries to stare down the aggressor as if to say, "You want a piece of me?" Often the spines are enough to discourage many predators.

Banded butterflyfish pairs like lovemaking, and will circle and chase each other until dusk, when the female lays about 3000 eggs. In a day the eggs hatch into little larvae, called tholichthys. The larvae have bony plates and are the color of the water, so they're almost invisible. They grow until they're about 1/2 inch long, then overnight they turn into juvenile butterflyfish. The juveniles are brownish in color and stay in grassy areas where they're well camouflaged, and, if they are spotted, they have an eye-like spot on their backs which confuses predators. The juveniles gradually change their colors to silver and black, and are mature when they're five inches long.

You'll likely see the banded butterflyfish when you go on a Key West snorkel, but you may also see them in aquariums. Fishermen in the Key West area catch them for the tropical fish trade. Some tropical fish fanciers like them, but others feel they're difficult to feed, since their diet is mostly found on coral reef. But they're otherwise easy to care for, and never bother other fish in the tank.

The banded butterflyfish is a handsome specimen of the fascinating sea life in the Key West waters, and a friendly one, too.