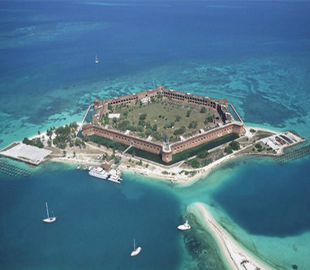 One of the most popular Key West snorkeling tours, a thrilling expedition to Dry Tortugas National Park offers astonishing coral reefs, brilliant marine life and intriguing wrecks. Because close to 99 percent of this incredible park is under the sea, the best way to tour this national treasure is by slipping on a mask and fins and diving right into the park’s pristine aqua waters. Located in the westernmost section of the Florida Keys, the Dry Tortugas islands include Loggerhead Key, Garden Key, Long Key and Bush Key. Bordered by the Florida Keys National Marine Sanctuary, the islands of the aptly named Tortugas are the driest places in Florida.

The Dry Tortugas is an archipelago seven miles long consisting of seven small islands and is considered one of the premier eco-attractions in the world. Dry Tortugas National Park is remote, unspoiled and spectacularly situated at the southwest corner of the Florida Keys reef system, reachable only by boat or seaplane. Located 70 miles west of Key West, the park has long been a major snorkeling and diving destination and is also the site of massive historic Fort Jefferson, used as a prison during the Civil War.

Snorkeling in Dry Tortugas National Park is nothing short of spectacular, especially as many of the wrecks and patch reefs are in shallow water. The park’s remote location, coupled by the easterly flowing gulf current that passes south of the park, creates the perfect habitat for an abundance of marine life. Float past reef fish, loggerhead turtles, groupers, sharks and more as you explore this magnificent underwater park.

One of the park’s unique aspects is the moat wall built around massive Fort Jefferson, famed as the largest masonry structure in the Western Hemisphere. Designed to protect the fort from amphibious assault and the rough waters of the Gulf, the wall itself has developed an amazing marine life habitat. Though swimming within the moat is prohibited, the area around the wall offers fantastic sightings of reef squid, nurse sharks, hogfish and occasionally an American crocodile. Cultural artifacts visible underwater include massive anchor chains and cement barrels.

Among the park’s wrecks, the remains of the Avanti, commonly referred to as Windjammer Wreck, is one of the most popular and accessible snorkeling sites. This steel hulled sailing vessel ran aground on the loggerhead reef in the early 1900s and is situated in only about 20 feet of water, covered in colorful coral and inhabited by an astonishing variety of reef fish.

Similar to the coral heads seen at Garden Key, the corals of the Little Africa formation are named after the fact that they grow in a shape resembling the outline of Africa when seen from the air.

The park’s most well-preserved coral heads are situated at the edge of Garden Key’s swim area, near Fort Jefferson. So massive that you can’t even swim over the top of them, these coral heads are home to both stony and soft corals, as well as an eye-popping variety of reef fish including angel fish, triggerfish and parrot fish.