The Different Types of Fins 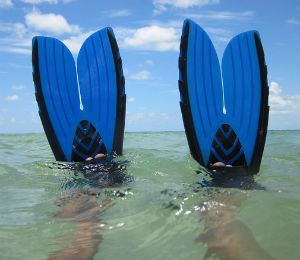 Snorkeling in Key West is one of the most exciting and adventurous water activities around. Swimming among different species of fish, coral reef and different types of underwater plant life is nothing short of breathtaking. What many may not realize is that there are a variety of types of fins at your disposal, each of which offers an entirely different experience. Here is an in-depth look at the different types of fins.

Closed and open foot fins are highly similar except for the very back of the fin. They also happen to be the 2 basic types of fins. An open foot design is used to be wearable with small dive "booties", which are typically worn in colder waters. These extra boots are meant to provide insulation. An open foot fin is identified by the fact that it is entirely open at the back of the heel, save for a small strap.

Out of these 2 options, a closed foot fin is the most common and best bet for anyone considering going snorkeling, except for the rare occasion in which you will be diving in cold waters. The great thing about closed foot fins is that they are generally less expensive and the fin weighs much less than the open foot variation. When snorkeling, the weight of the fin is extremely important, as a heavier fin requires more effort in order to effectively move it.

Split fins and paddle fins can be found in both the open and closed foot variations. Choosing which of these fins is right for you can be a bit trickier than making the decision between closed foot and open heel fins. As such, there are visible benefits towards using both.

In essence, a split fin has a space within the fin, basically creating 2 fins. These are great for longer swims, as the fin was designed to help the user expel less energy as they swim. When propelling themselves forward, the swimmer only uses short leg strokes instead of the longer ones found with paddle fins. When buying split fins, it's important to base your decision on quality, as split fins are more difficult to create than paddle fins, meaning that a shoddy design by an inexperienced manufacturer can render the fins useless.

Paddle fins are more of a basic and traditional design. As the fin is not split, the user must thrust harder to accelerate. However, this allows for more power to be exerted when thrusting, helping the fins to provide the diver with faster speeds and extra maneuverability when swimming.