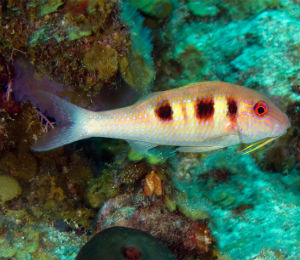 One of the favorite sea creatures that participants of our popular Key West snorkeling tours always enjoy seeing up close is the Spotted Goatfish. This species of fish, whose official scientific name is Pseudupeneus maculatus, makes its home among the coral reefs, eelgrass beds and shallow waters along the western Atlantic Ocean, stretching from Brazil all the way north to the shores of New Jersey. You're most likely to spot the youngest goatfish in seagrass beds, while the mature adults can be best observed by watching the schools that are swimming over the sand and rock bottoms located near the coral reef.

Your chances of viewing Spotted Goatfish during on a Key West snorkel tours is extremely high because these are very active fish that need to supplement their carnivore diet very often throughout the day to keep their energy levels steady. When swimming through the crystal clear waters, Spotted Goatfish are white in color, with three distinctive black patches appearing below their dorsal fins on the upper sides of their bodies. But when they are inactive, they can easily blend into the underwater background, changing their appearance to a mottled red and white that matches the sandy bottom and reef coral when they lay resting.

It may take some patience to initially spot them when they are inactive because of this color-changing disappearing act. But once you do notice Spotted Goatfish, which usually travel in schools, pay attention to the two barbels situated directly under the tip of their chin. This distinctive feature is how they get their name and is an essential part of their anatomy they need to find the massive amounts of shrimp, crabs, clams, clam worms and other bottom-dwelling invertebrates they feed on regularly and often. Watch how they use these barbels as they swim along the sand, gently exploring sandy areas by both touch and sense to discover the crustaceans, worms and mollusks that are hidden underneath.

Pay attention the types of fish that often follow Spotted Goatfish during their feeding expeditions. Yellowtail Snappers and Bar Jacks, two other carnivorous fish species, often play follow the leader and scoop up some of the prey that Spotted Goatfish manage to stir up after disturbing the sand. If you take a Key West snorkeling tour in late spring, you are likely to see pairs of Spotted Goatfish rising through the waters in steep circles during the spawning season.

Spotted Goatfish can live up to four years and grow as long as one foot in length (30cm). They can add up to 400 offspring every time they spawn, so this is one species that is among the most plentiful in Key West waters and not on the endangered species list. One of the highlights of a snorkeling tour can be seeing their magical color changing act up close and personal, from white with black spots while seeking their prey, and then effortlessly disappearing as they change to mottled red and white, resting on the sand and rock bottom of the ocean floor.