Snorkeling in the 20th Century 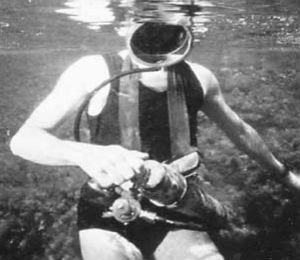 One of the most popular of outdoor activities in southern Florida, Key West snorkeling expeditions open a world of undersea wonders to thousands of visitors every year. Once used for purposes ranging from sponge diving to military operations, snorkeling has shot to the top of the list of seaside leisure activities. The earliest snorkels were just hollow reeds, but during the 20th century, advances came fast and furious, leading to the high tech snorkeling gear we enjoy today.

Ironically, this favorite holiday pastime really came into its own during World War II, when special divers nicknamed “frogmen” were trained to carry out special missions for the United States Navy against the Japanese in the Pacific Ocean. Due to the importance of the missions, a substantial amount of effort was devoted to making the frogmen’s snorkeling masks and scuba tanks as efficient as possible, gradually improving safety and ease of use. It was only after the war that these same types of masks and tanks became popular for recreational explorations.

In the early days of the 20th century, several French inventors developed the primitive forerunners of today’s snorkeling equipment. Waterproof swim goggles were the brainchild of French inventor Guy Gilpatric in 1930. Just a few years later, Yves le Prieru created a device that allowed breathing under twenty feet of water for over 15 minutes.

As snorkeling for fun became an increasingly popular pastime, modern technology was employed to significantly enhance equipment. With the advent of improved plastic and rubber compounds, manufacturers were able to make better masks using treated safety glass. Fins were upgraded to maximize swimming easy and speed, while snorkel tubes were designed to better eliminate the problem of water entering with each wave.

Though people could paddle through the water barefoot, it soon became obvious that explorers could swim longer and faster with the addition of fin-like footwear. Frenchman Louis Marie de Corlieu was granted the first patent for fins in 1933, with mass production beginning in 1939. Fins made snorkeling easier for any level of swimmer, leading to a dramatic increase in the sport’s popularity. The foot gear became even more advantageous when American inventor Owen Churchill came up with the idea of using vulcanized rubber as fin material, an idea he got after watching young Tahitian divers dipping woven mats in tar and strapping them to their feet before entering the water.

In 1938 Guy Gilpatrick published “The Compleat Goggler”, a classic diving detailing his adventures in the new sport of goggle fishing. A short while later, in 1943, Emile Gagnan and Jacques Cousteau, fellow undersea explorers, invented SCUBA gear. The 1950s brought numerous advancements in the development of modern snorkeling gear, beginning in 1950 when manufacturer Cressi put out a mask that enclosed the nose, allowing for equalized pressure. In 1953 neoprene wetsuits went on the market, providing enhanced comfort in cooler waters.

Though mainly a leisure pastime today, snorkeling equipment is also used as hunting and athletic gear. Underwater hockey and rugby players have found the equipment allows them to stay underwater longer, making more exciting and challenging. Snorkeling gear is also used by spear fisherman and water-based search and rescue teams.