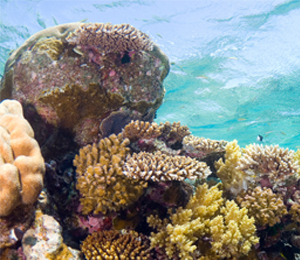 With over 2 million visitors coming to beautiful Key West during the year, you want to make sure that your snorkeling adventure is not so overcrowded with other divers that you can't enjoy the scenery. After all, it's just that sceneryandmdash;the brilliant coral, brightly-patterned tropical fish, and exotic sea lifeandmdash;that drew you to spectacular Florida Reef in the first place. Don't worry: Our captains and crews want to make your snorkeling in Key West to be as special as possible, and that includes visiting some secret reef locations that are not frequented nearly as much as the tourist trap locations.

Here are some of our favorite hot spots for snorkeling in Key West:

Cottrell Key is found on the western side of Key West. To get there, we'll head into the Gulf of Mexico. This patch coral reef and sponge garden lies in shallow water, enabling it to serve as a home to sea fans, sponges and coral head formations. The bottom here is sandy, covered in waving sea grass and coral. We generally visit this location during some of our backcountry tours, like the Dolphin Watch andamp; Snorkel.

This location is a good opportunity for you to spot the occasional shark, as well as the gigantic Goliath grouper. It's a virtual paradise for parrotfish, and snapper are seen here too.

Western Sambo is located on the eastern side of Eastern Dry Rocks. The entire area is part of the Florida Keys National Marine Sanctuary Ecological Reserves. The Reserve begins at the edge of the beach, extending into the water. In this shallow zone, sea anemone, starfish and sea urchins abound.

As the water drops off further, coral outcroppings provide a home for barracuda, shark, grouper and more. The preserve itself supports an incredible diversity of wildlife within the parameters, and it is a snorkeler's paradise. This is a location we frequently visit during our Double Dip snorkel adventures.

Truly considered a hidden gem, the location of this area of coral is actually uncharted, allowing us to enjoy an incredible coral outcropping in relative solitude. Located southwest of Key West, the reef lies in a circular shape our crew refers to as a andlsquo;halo.' We like to visit this area during the Island Adventure tour because our ship's shallow draft allows us to get close into the area for some great snorkeling in Key West as well as superb beach combing.

We try to take snorkelers to Sand Key as often as we can, because it's one of our favorite spots. This is the home of the historic Sand Key Lighthouse. Sand Key is a unique spot, because it originally was an actual island. Due to erosion, over time the island shrank until it was a small sandy beach surrounded by a coral reef.
If you are lucky, you will spot some of the huge loggerhead turtles that call Sand Key their home for part of the year. You may also see some of the large grouper that like to hang out around Sand Key, as well as barracuda.

The coral here is spectacular, including specimens of elk horn coral and fire coral. Fire coral is an organism that resembles true coral, but it comes by its name honestly. Divers and snorkelers who accidently brush up against fire coral receive intense stings from the tiny barbs launched by the coral.

A little further east we often visit Rock Key. With depths ranging from 15-35 feet, there are amazing crevices and deep canyons to explore, with a wide variety of coral. At least two ships went down in this area, and divers and snorkelers alike can see clear evidence of the wreckage left behind.

Further east, we find Eastern Dry Rocks. This is the location where an ancient Spanish galleon sank eons ago. This area is superb for seeing large coral formations, and we often spy lobster hanging out in between the coral andlsquo;fingers canyons' that make up Eastern Dry Rocks. You may even spot a hammerhead shark cruising through the deeper waters. Keep a sharp eye out, as you may see one of the moray eels that like to hide out in the crevices of the reef. This environment is good for octopus, sea turtles and spotted eagle ray sightings as well.

With the variety of secret snorkeling sites we visit, chances are that your snorkeling adventure will net you some great wildlife sightings as well as create some great stories to take home with you.