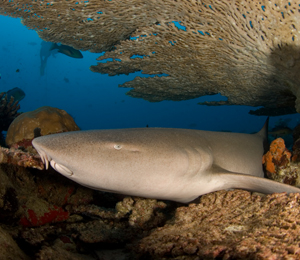 The original of the name andldquo;nurse sharkandrdquo; is fairly unclear, though some believe that the species received its name because of the fact that it resembles a nursing baby. Others believe that the name is derived from the Old English word andldquo;hurse,andrdquo; which means sea-floor shark.

This is more probably because the nurse shark is, in fact, a shark that dwells on the bottom of the ocean. It is also generally harmless unless, of course, it is provoked.

It has a characteristically wide head with very strong jaws and very visible barbels, which are the fleshy organs that look like whiskers located on the front of the jaw.

These barbels sense touch and taste for the shark. The nurse shark has a spiracle behind each eye. The spiracle is the organ that enables the shark to breath when it is resting at the bottom of the ocean.

Nurse sharks usually rest in groups during the day and then hunt at night. They will most commonly eat bottom-dwelling fish, shrimp, crabs, sea snails, lobster, squid, octopus, and coral.

They are able to eat shellfish and coral thanks to their very strong jaws, but preferably will eat soft fish and squid if they can find them. Most nurse sharks are grayish brown in color and they have very large and highly distinctive fin tails that can be as large as one-fourth of the shark's total length.

Nurse sharks are generally found in warm and shallow waters, especially in the western Atlantic Ocean, which is, geographically, where you will be diving with Key West Snorkeling. They are ideal sharks to see when on a Key West snorkel trip because they are one of the rare shark species that do make their habitats close to human activity.