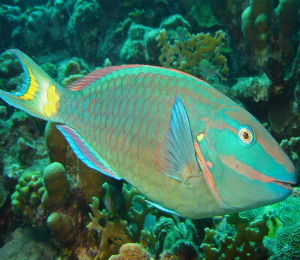 Like many fish, stoplight parrotfish are visually striking. Their gender and age determine the coloring of their bodies. Adult males are vivid blue and green with hints of pink. Their tails also feature yellow elements. Youngsters are both brown and red. Stoplight parrotfish can grow to 3.5 pounds in weight and 22 inches long. They possess sturdy jaws that are reminiscent of beaks, and their teeth are fused.

Stoplight parrotfish feed on soft algae and corals that appear on stone surfaces. Dead and live coral alike are their favorite forms of sustenance. Their approach to eating often involves digging out coral skeletons. They make significant holes using both their regenerative teeth and tough jaws. Although it looks like stoplight parrotfish are simply dining on coral, they actually receive their nutrients via the polyps that reside inside of the coral skeletons. As far as food choices go, stoplight parrotfish are particularly fond of finger coral, boulder star coral and elkhorn coral.

You might be lucky enough to spot stoplight parrotfish on a upcoming Key West snorkel. If you ever visit an aquarium, you might see them there, too. They're commonly seen in aquaria due to their attractive and memorable coloration.

One fascinating fact regarding stoplight parrotfish involves their ability to switch genders while they're alive. Their gender switches are thought to happen as a means of dealing with small populations. When there aren't many breeding female or male parrotfish around, they sometimes change genders.

If you're on the lookout for stoplight parrotfish while snorkeling, don't expect to ever see them in big groups. They're often seen solo or amid tiny social units. Stoplight parrotfish are rarely spotted behaving fiercely toward other types of fish. When they're truculent, they're usually that way toward each other.