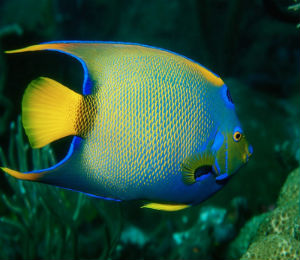 If you're planning on enjoying Key West snorkeling in the future, you'll probably be lucky enough to spot a variety of exciting and visually striking fish. Queen angelfish (Holacanthus ciliaris) are one specific type of fish you might see while experiencing a Key West snorkel. Other names for these fish include golden angelfish, yellow angelfish and queen angel.

If you're close to any queen angelfish while snorkeling, they'll be hard to miss. They boast vivid yellow tails, conspicuous bright blue physiques and elements of orange and pale purple. They possess circular heads, tiny mouths, lengthy fins and flat, lengthy bodies, too. Youngsters look markedly different than mature queen angelfish. Young queen angelfish generally have pure yellow or yellow and blue striped bodies. Adult queen angelfish grow to lengths of a maximum of 18 inches. Some of them weigh as much as 3.5 pounds. Female angelfish tend to be smaller than their male counterparts.

They're called queen angelfish because of the dark spots on their heads. These dark spots feature blue rings and look somewhat similar to crowns, hence the "royal" element of their naming.

They hail from the western region of the Atlantic Ocean. Not only are they often seen in the waters surrounding Key West, but they're also frequently seen around Brazil and Bermuda. Queen angelfish reside in coral reef, generally by the bottoms. They use coral reefs for food purposes. While queen angelfish are marine fish, they can handle salinity shifts. They sometimes reside in marine aquariums.

If you see a queen angelfish while snorkeling, the specimen will likely be alone or with one other. Queen angelfish tend to have somewhat timid dispositions. Queen angelfish often experience success in roomy aquariums, however. When they adapt to their aquarium environments, they frequently develop lively and spirited temperaments. Queen angelfish sometimes even develop rapports with their human caretakers.

As far as food goes, queen angelfish are extremely fond of algae and sponges. They mostly consume those foods. These angelfish also occasionally feed on soft corals and sea fans. They sometimes dine on jellyfish, too. Other creatures regularly eat queen angelfish. Bigger fish that reside in coral reefs tend to prey on them the most.

Queen angelfish interact with each other by undergoing brief color changes. This is especially common during reproduction. They're thought to be polygynous creatures. Queen angelfish are frequently seen living in harems prior to spawning. These harems are usually made up of single males and as many as four females. Queen angelfish spawn in the wintertime. When they reproduce, they draw their stomachs closer to one another. They then emit masses of eggs and sperm.

If you go snorkeling in Key West, a few handy details on queen angelfish can make pinpointing them a much easier task.