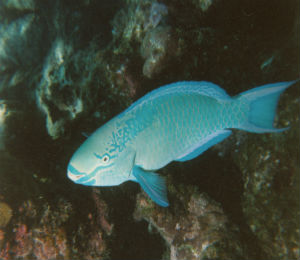 About the Princess Parrotfish

The Princess Parrotfish has no known history of attacking human beings, even when disturbed, and does not need to be considered dangerous. The most significant danger from the Princess Parrotfish is its relationship with ciguatera, a food-based disease recurring in humans whose diet consists of reef fish that have absorbed excessive environmental toxins. Ciguatera is resistant to cooking methods that could kill other diseases. Symptoms of this disease, such as headaches or nausea, are highly visible. Unfortunately, there is no known cure for ciguatera, but almost all victims recover naturally over extended periods time. Regardless, the small stature and questionable nutritional benefits of the Princess Parrotfish makes it an impractical meal, and most restaurants do not serve it as a menu option.

Enthusiasts of diving (whether it be for the archetypal Key West snorkeling or elsewhere) or other diving endeavours often note, with enthusiasm, the coloration of the Princess Parrotfish. Prior to achieving full maturity, its distinctive striping, combined with dark olive and contrasting white coloration, gives the Princess Parrotfish a faint resemblance to a zebra's hide. Its colors become bolder once fully-grown, and often include pink highlights (as stripes, larger patches or scale-segmented outlines) to an iris or indigo body.

For those who are interested in Bermuda snorkeling, a Key West snorkel or other diving pastimes, the Princess Parrotfish is easy to find: it hovers at relatively shallow depths between three and twenty-five meters. Like all reef fish, it is found most frequently in reefs, but also may extend to sandy patches of water.

At its extreme boundaries, the natural habitat of the Princess Parrotfish includes southern Florida, the western Gulf of Mexico and the northeastern coast of South America. It also saturates most areas of the Florida Keys islands, including Key West. More rarely, it may be found along the coast of Louisiana or Texas.

Besides how it comports itself while awake, the Princess Parrotfish also has facts of interest about its sleeping habits: it surrounds itself with a light, protective cocoon. This mucus-based barrier bears some superficial resemblance to a filmy soap bubble or a delicate spiderweb.

Because of its delicate lifespan stability, the Princess Parrotfish is rarely found in any domesticated setting, and is most easily seen on snorkeling expeditions or similar diving experiences.