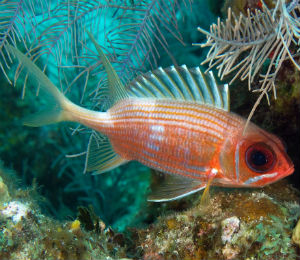 Of the many exciting things you'll see and experience while Key West snorkeling, the wide array of marine life is sure to impress. The reefs around Key West are bristling with beautiful, exotic andndash; and sometimes, strange andndash; fish that you'll be able to see up close in their own environment.

Longspine Squirrelfish are found throughout the Caribbean Sea, in the northwestern Gulf of Mexico, along the northern shores of South America, and as far east as Bermuda. The fish occupies dark crevices of coral reefs and can be found both near the surface and in depths of up to 100 feet. The Longspine Squirrelfish is quite territorial, and will try to ward off other fish and even predators, such as the Moray Eel, from its environment. It emits a grunting sound to fend off threatening fish and uses a higher, short burst of staccato sounds to signal alarm to other Longspine Squirrelfish. When it does this, its fellow squirrelfish will retreat into their crevices and then peak out to investigate the threat. Keep in mind that when you're on a Key West snorkel, fish and other marine life may at first perceive you as a predator, so make sure not to overlook the nooks and crannies of the reef. You might see something looking back at you!

The Longspine Squirrelfish is a nocturnal hunter. While it spends most of the day around the crevices of the coral reef, it ventures out into the sands and sea grass beds at night to search for crabs, shrimp, gastropods (mollusks, clams, etc.), and brittle stars. Its large eyes give it special sensory perception to be able to forage effectively for food at night. Although the sharp spines of the Longspine Squirrelfish can secrete a poison, the fish itself is edible to humans, and is more popular as a fish to eat in South America, and particularly in Brazil and Venezuela.