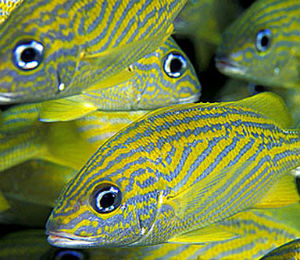 The French grunt is one of several reef-dwelling fish you'll likely encounter on your Key West snorkeling trip. Also known by its scientific name Haemulon flavolineatum, the French grunt's habitat extends from the western Atlantic Ocean near Bermuda and the northern Gulf of Mexico to the coasts of Central and South America. The French grunt's rather odd name actually comes from the grunting sound that the fish make with their pharyngeal teeth.

Snorkelers can easily identify the unique fish by its yellow fins and horizontal bright yellow or orange striping throughout the rest of the body, which is often contrast by white or bluish striping. Most adult French grunts range from 15 to 30 centimeters in length, with female grunts achieving reproductive maturity at 16 centimeters.

The French grunt lives around the coral reef and rocky substrate that make up its habitat, usually within large schools that often number in the thousands. French grunts can also be found in and around elkhorn coral, as well as under the abundant ledges of its habitat. Juvenile grunts spend most of their development within the protective cover of seagrass beds commonly found in bays and lagoons. Schools of French grunts can number into the thousands and they may mingle with schools of other types of grunts.

The French grunt also happens to be a nocturnal creature as it spends most of the day close to the reefs, sheltering itself within the branches of coral or underneath ledges. But when the sun sets, the French grunt comes out of hiding to meet up with others of its species. These large schools then travel to foraging grounds located as far as a half-mile away, where they then split up and forage alone until sunrise. Small crustaceans are usually on the French grunt's menu. As the grunt searches the seagrass beds and sand flats for food, it relies on its pharyngeal teeth to capture and pull in prey.

Not much is known about how the French grunt reproduces, except where it keeps its juveniles for protection against predators such as the black grouper, Nassau grouper and trumpetfish. The grunts spawn in the open sea and their larvae drifts towards the seagrass beds and shallow back reefs after entering the planktonic stage. The juveniles remain under this protective cover until they've matured enough to join the adult population. Provided the fish hasn't been targeted by its predators, the French grunt usually enjoys a lifespan of approximately eight years.

The French grunt is one of the many common sights on most Key West snorkeling tours. Seeing schools of the vibrant and colorful fish shimmer and move in concert is an amazing sight to see in person. Don't miss the opportunity to see for yourself the exotic beauty of the Gulf and all it has to offer.