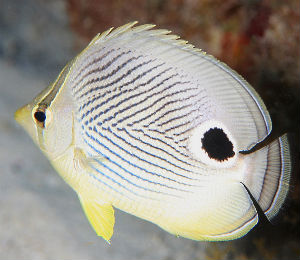 Next time you're lucky enough to enjoy some Key West snorkeling, you may also get the opportunity to see one of the most agile coral-dwellers in the area, the foureye butterflyfish, sometimes also called the andldquo;four-eyed butterflyfishandrdquo;. This little guy gets his name from the large dark spot on either side of his rear section, which looks a lot like an eye due to the bright white ring that surrounds it. When the foureye butterflyfish feels threatened, it presents these false eyes to the potential predator, hoping to confuse it into attacking the wrong end of the fish's body. The foureye's line of defense doesn't stop there, however, because prominent spines on the dorsal and rear fins make the foureye butterflyfish an uncomfortable dinner.

In general, this four-inch long andldquo;bristle-toothandrdquo; is more a lover than a fighter. Foureye butterflyfish mate for life, and are most often viewed in pairs. If the fish is separated from its mate, it will make a serious effort to relocate him or her, swimming upward in an attempt to gain a better view in its search for the missing partner. If you are fortunate enough to witness the foureye's courtship dance, you'll get to see some of the most acrobatic and energetic choreography in the reef. The foureye is flat with a concave forehead, and is designed to fit into the tiniest crevices of the coral. The foureye can also swim upside down or on its side, navigating the coral like a well-trained fighter pilot. Mating pairs will chase each other in the manner until dusk, pausing only briefly the circle one another head to tail. This maneuverability also helps the foureye avoid confrontations with predators.

The foureye is the perfect fish to discover while on a Key West snorkel, because they usually feed in shallow water and seagrass beds and, though they're fast and maneuverable, it's easy to spot the foureye's graphic patterns. Besides their dark false eyes, the foureye is also marked with a black stripe that further camouflages its real eye, a mark which is characteristic in a variety of butterflyfish, The foureye also has a distinctive, short snout which aids the little fish in rooting through small crevices in the coral as it searches for food. The foureye is the only butterflyfish to display a chevron-type pattern along the sides of its body.

Because of its small size and unique markings, the foureye butterflyfish is often harvested as a popular addition to saltwater aquariums, although its knack for hasty exits makes it a difficult fish to catch. Keep your eye out on your next Key West snorkeling adventure, and you might be able to catch a glimpse of this shy little four-eyed acrobat.