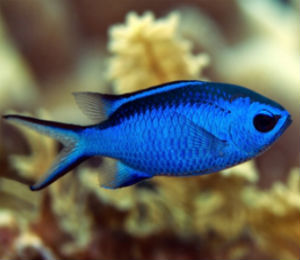 Key West snorkeling awards visitors to the Florida Keys an underwater adventure. While it can be easy to lump the various species of fish into a generic grouping, your snorkeling trips will become all the more pleasurable when you're able to recognize what the Keys has to offer. One of the most vibrant and colorful reef dwellers is the blue chromis. The body of this brilliantly blue fish can darken or lighten at will. It's also oval and small, with a long forked tail. It can also be identified by the black markings on the outward edges of the tail and back. In addition to Florida, blue chromis fish can also be found in the Caribbean and Gulf of Mexico.

The blue chromis favor the coral reef zones that are heavy with planktonic vegetation. Key West snorkeling lovers will also find them favoring cozy nooks and crannies toward the back of the reefs. However, they have a preference for steeps slopes where they can make a quick get-away. While the blue chromis isn't harvested for human consumption, they are often collected for the aquarium trade business because of their vibrant color and appearance.

While the fish remain hidden in their protective holes during the night, they'll rise above the coral reef at sunrise and feed on plankton in schools. In addition to planktonic foods, this omnivore also enjoys eating jelly fish. Known predators to the blue chromis include other reef dwellers such as the trumpetfish, snapper and grouper.

While the best time for a Key West snorkel enthusiasts to catch a glimpse of the blue chromis is during the day when the schools are feeding above the reef, snorkelers may also witness them darting in and out of the small holes. The fish is best viewed when approached slowly. However, patience is a virtue to those who can wait quietly for them to come out of their holes.

The male blue chromis is very territorial and will protect its habitat from other intruders. In addition to chasing and biting, the male species will repel the other predators by spreading their fins and swimming or shaking its body until the opponent backs down. This behavior is especially common when faced with other dominant male blue chromis. With their speed and agility, they are also able to quickly avoid the most dangerous of predators by slipping inside their coral reef shelters. The blue chromis also has the ability to change color. This allows them the chance to hide from their prey by darkening or lightening the colors of their bodies to match and blend in against the back drop of the coral reef.

Since the blue chromis tend to stay close to the shelter that the reef provides, snorkelers can get their best scenic view of this spectacular fish by swimming close to their habitats.