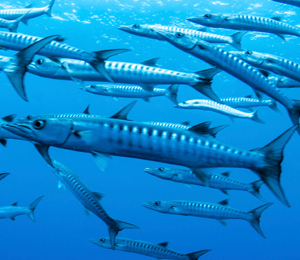 One creature that could be spotted while snorkeling in Key West is the Great Barracuda. Also called the Giant Barracuda, it's mostly silver and has little black spots that help it blend in with its surroundings. It's long, thin form flits through the water, displaying its mouth full of sharp, pointed teeth. In certain environments, the fish can camouflage itself, darkening its skin color to surprise their prey.

The largest of the barracudas, they live in the warm ocean waters, typically near reefs. They hunt both on their own and in small groups. Great Barracuda are incredibly swift, some moving as fast as 40 feet per second. When they catch their prey, they break it into large pieces, then return to consume the smaller pieces.

Adults tend to hunt near the surface of the water, preferring to stick to the where the water is murkiest so they're less likely to be seen. The fish stick to the coral reef and sponges, hiding among them. Sometimes, the young hide in the mangrove trees' long sinewy roots.

These sea creatures are attracted to shiny objects, most likely because they consume silvery fish, so divers or people snorkeling in Key West should avoid wearing, or at least flashing, shiny jewelry when in their habitat. Although they rarely attack humans, they do attack fiercely and ferociously. Their blows aren't usually fatal for humans, but they can be very serious. Splashing around will also attract barracudas.