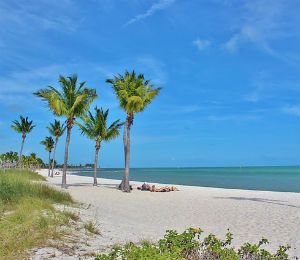 Only go out when it’s calm, with low waves if any and minimal current activity. Not only can waves make entering and exiting the water dangerous, but it also makes swimming more exhausting and can even make you seasick. Since waves hamper underwater visibility, they generally result in a poor snorkeling experience anyway. Normally mornings offer the calmest seas.

Snorkel From a Beach First

Often for first time snorkelers, it’s best to take to the water from a beach. You’ll be in a shallow, sandy area with the security of being close to shore, able to stand up if you’re just getting used to a snorkel and mask and need to make adjustments. Starting at a beach will help you overcome any fears about floating easily, breathing through a snorkel or keeping water out of a mask. Once you’ve mastered the basics, you’ll be ready to take that exciting leap off a Key West snorkeling tour boat and into the deep water.

Do a little local research and pick an interesting spot to snorkel. Many Key West beaches are alive with loads of fish and corals. Try to go somewhere less popular, as heavy traffic may have resulted in harm to the reef. Whereever you go, be sure to have a partner; problems can arise quickly in the water and you shouldn’t be swimming alone.

Watch for Rocks and Waves

The most risky part of snorkeling is generally getting in and out of the water. Locations with sandy bottoms are generally safest, particularly when water is calm and clear. Safety hazards include rocks, incoming waves and poor visibility. As a rule of thumb, it’s wise not to go in at all if waves are getting sizable. Not only can it be dangerous, but it’s hardly worth the risk as wavy conditions usually result in poor visibility and uncomfortable swimming. Conditions may also worsen while you’re out, increasing potential dangers. If you must go in when it’s wavy, study the wave sets, or patterns in order to enter the water during a smaller set.

Be Careful in Shallow Locations

Particularly when snorkeling over shallow areas like reefs, you’ll need to watch out for ocean surge. This is a large up-and-down movement of the ocean itself and is most noticeable close to shore. A sudden surge can flush you quickly in or out of an area, and can drop you on top of hazardous objects like reefs or rocks if you're in shallow water. Particularly dangerous locations for surge include shallow areas in the open ocean and coastal areas with overhanging cliffs. While swimming under a cliff, a sudden surge could lift you against the cliff roof. Due to these risks, make it a practice to cross shallow areas quickly.