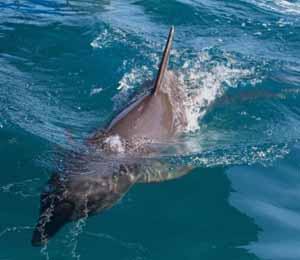 One of the most glorious experiences when snorkeling Key West is the unforgettable chance to observe and swim with the amazing array of marine life that calls the Gulf of Mexico home. Brilliantly colored reef fish, turtles, eels, lobsters, rays, manatees, lobsters and conchs are just a few of the hundreds of species calling the reefs and wrecks of Key West home. But certainly one of the most magical sights on a Key West snorkeling tour is the spectacle of a pod of dolphins frolicking in sparkling azure waters. Key West snorkeling tour operators are attuned to watching these amazing marine mammals respectfully and will be happy to fill you in on some intriguing facts about these highly intelligent creatures.

Many people have seen dolphins perform in aquarium shows, where their lively personalities, quick intelligence and ability to learn complex tricks often make them the stars of the show. With a curved mouth giving the appearance of a continuous friendly smile, the bottlenose dolphin is incredibly appealing to kids of all ages. Though it may be fun to watch aquarium shows, there is no comparison to spotting the creatures in their natural habitat, where they leap, play and sometimes come up for a friendly visit to passing boats. If you’re very lucky, your Key West snorkeling expedition will have a jolly meet and greet with one of the Gulf’s playful dolphins.

In the wild, bottlenose dolphins are incredible swimmers, reaching speeds of over 18 miles per hour, surfacing to breathe two or three times every minute. A highly sociable species, these sleek swimmers travel in groups called pods and communicate with each other by a highly complex series of sounds that we hear as squeaks and whistles emitted through the blowhole. Their ability to communicate is so advanced that a pod of dolphins has been known to find and rescue an injured dolphin and bring it to the surface. Other means of communication include body language like slapping their tail on the water surface, leaping into the air, butting heads and snapping jaws.

Dolphins navigate the underwater world by means of echolocation, a sort of living sonar system that sends out over 1,000 clicks per second. The sounds bounce back to the dolphin when they hit an object, revealing the size, location and shape of the target. In this way, they can locate the bottom-dwelling fish, shrimp and squid that form a large part of their diet. They’ll even spot a fishing boat to follow in hopes of dining on a few leftovers.

Although pods typically consist of between 10 and 30 members, they have been known to reach more than 1,000. Highly social creatures, dolphins may work together to harvest schools of fish, but they also hunt alone. They have a keen sense of sight and are able to see in very dim water. Voluntary breathers, they generally rise to the surface and open their blowhole two to three times per minute to get oxygen, though they are able to remain submerged for up to 20 minutes. Keep an eye out when snorkeling Key West and you just might spot one of these graceful mammals surface with a playful splash!